The Cover to Cover Challenge at The Bitten Word inspired me to put my November issue of Food Network Magazine to good use.  My plan is to cook my way through the issue and share my results,  hopefully thirty recipes that would be perfect to serve at your Thanksgiving table this November.  I’m kicking off Thirty for Thanksgiving and November with a twist on traditional pumpkin pie. It’s a beauty!

You can find the original recipe from the Food Network here.  I added bourbon to the filling and to the whipped creme topping layer but you can skip this  if a bourbon flavor doesn’t suit you or your guests.

Technically this falls into the chiffon pie category because it’s made with gelatin and beaten eggs, is covered with a final layer of whipped cream and has a light, airy texture. Chiffon pies became popular in the early 1900s and were often called  Sissy Pies, Fairy Tarts, or Souffle Pies.  Fairy Tarts is fantastic…

I hope you like this take on pumpkin pie and the 29 Thanksgiving recipes to come!

Don’t be intimidated by gelatin. All you have to do is open the pre-measured packet and sprinkle over water. Come back 5 minutes later and the gelatin will have worked it’s magic. 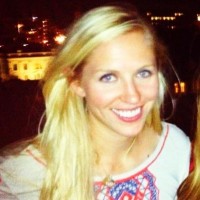